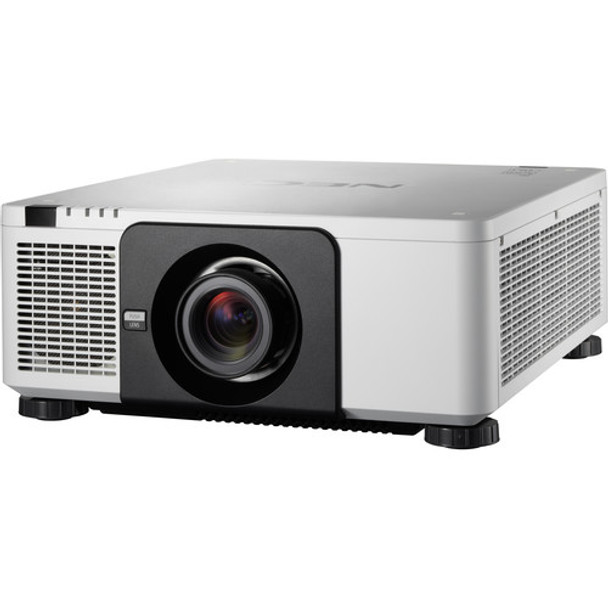 The white PX1004UL 10,000-Lumen Professional Installation Projector from NEC is a powerful projector with a laser/phosphor light source. It comes with many features like stacking correction, edge blending, geometric correction, and more. The stacking correction capability allows up to four projectors to boost an image's brightness up to 40,000 lumens, which is suitable for larger-sized screens and environments with heavy ambient light. This feature also prevents the complete loss of image which can happen when using only one projector. The edge blending function seamlessly blends multiple projected images to display a single high-resolution image.

Projecting an image isn't confined to a standard flat screen or wall with the PX1004UL projector. Geometric correction allows the image to be projected on spheres, cylinders, corner angles, and many other non-standard surfaces. Since the projector comes without a lens, you have the option of using eight different lenses as per your application's need. With 20,000 expected hours of operation, the projector is suitable for retail, simulation, and theme park installations.

MSRP:
Now: $2,099.00
Was:
Product Description Drive exquisitely detailed home cinema with this powerful SR6015 AV amplifier. Delight in the most musical sound for any source - from movies to vinyl to digital streaming. Its...
Add to Cart
Quick view
Model: L-REPPRO-BLK