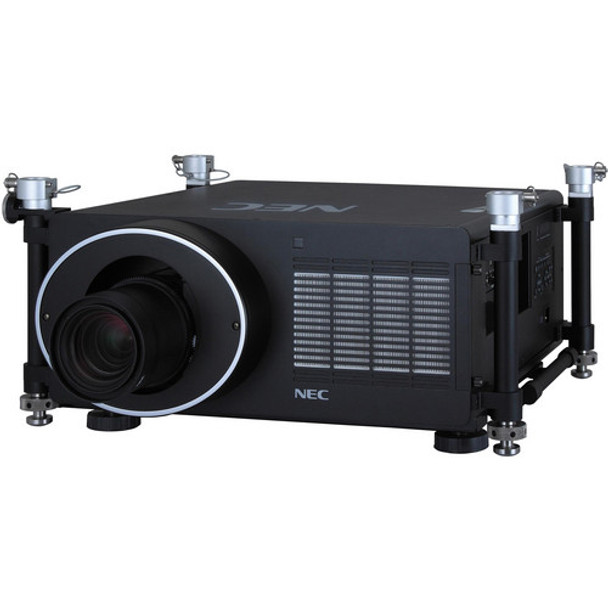 The NP-PH1400U 14,000 Lumen Professional Integration Projector from NEC is a fixed installation class projector for event spaces, large venues, houses of worship, lecture halls, theaters, and other settings that require a powerful light output. The NP-PH1400U features three 0.96" DLP chips that generate a 1920 x 1200 (WUXGA) native resolution and a 16:10 aspect ratio. A built-in scaling engine means the projector can accept many lower resolutions as well, including a variety of VESA computer resolutions as well as HD and SD video. Featuring an interchangeable lens design, the projector is compatible with as range of separately available lenses from NEC, including short-throw, zoom, and long-throw options.

Adaptable to a variety of input sources, the projector features two VGA inputs, an HDMI input, DisplayPort input, and Composite and S-video inputs for legacy analog equipment. There is also a 5-BNC hybrid analog input that can accept both RGBHV and Component signals. For future expansion there is an OPS (Open Pluggable Specification) slot so that you can add additional inputs and/or outputs, such as SDI, using separately available OPS-compatible expansion boards.

The projector can be controlled directly using surface panel buttons or the supplied IR remote. In addition, there is an Ethernet port and RS-232 port for remote operation either using proprietary software, software built into some operating systems (such as Windows Vista), or by logging into the projector with a web browser.

Outputs up to 14,000 lumens, and supports "stacking" of multiple projectors to produce even higher light-levels

Short throw, zoom, and long throw lens options - available separately - mean this projector can be adapted to a wide range of setups, from close to screen mounting for rear projection to ultra-long throw for theaters or lecture halls

Automatically resets lens attribute including zoom, focus, and shift based on the input resolution and input selection

Operate the projector remotely across a network either using the Virtual Remote desktop software or from a Web browser by entering the projector's IP address (settings password protect-able). Alternatively, use RS-232 to establish a direct connection between the projector and a computer without exposing settings access to the network. There is also a wireless LAN adapter available separately for connecting to your network wirelessly

Dedicated projector software that provides wired and wireless data transmission via RS-232 or over the network. With Broadcast mode you can send information from one computer to several projectors

Displays multimedia files (.jpeg, .bmp, .png, .mpeg2, or .wmv9) stored in a Windows shared folder or on a Windows Media Connect server present on the same network as the projector, allowing you to give presentations without bringing your computer into the conference room

Calculates the energy saved by operating the projector in ECO Mode. A green ECO Mode button on the remote control allows you enable or disable ECO Mode without going into the menu

Responds to users inputs within three to four seconds, even while the projector is still warming up. Quick Shutdown, meanwhile, means you can kill the projector immediately, with no cooling required after shutdown

Enables you to monitor and make adjustments to the projector remotely

Uses a webcam to help align multiple images when "stacking" up to four projectors for a brighter output - up to 56,000 lumens with four projectors. Stacking also provides redundancy, meaning you will still have an image even if one projector in the system fails

Combine two video sources in one presentation. Picture-in-picture overlays a smaller sub-window over the main image, whereas side-by-side gives both images equal precedence

Automatically correct when projecting onto non-white surfaces, such as a wall that is painted green

Optimizes settings for DICOM imagery such as X-rays

Projecting an image isn't confined to a standard flat screen or wall. Geometric correction allows you to project onto shapes such as on spheres, cylinders, corner angles, and many more non-standard surfaces

MSRP:
Now: $16,789.00
Was:
NEC PX1004UL Overview The black PX1004UL 10,000-Lumen Professional Installation Projector from NEC is a powerful projector with a laser/phosphor light source. It comes with many features like...
Quick view
Model: NP-PA653UL