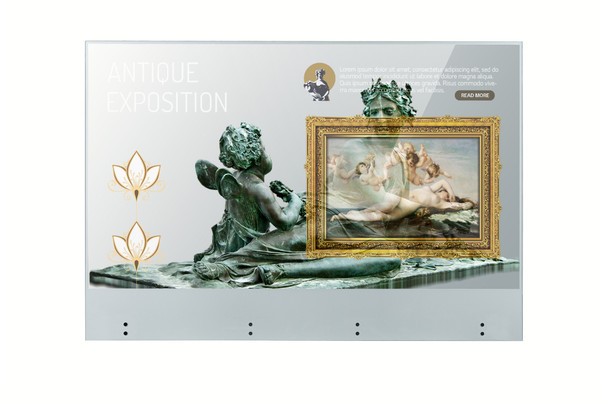 A New Level of See-through View

LG Transparent OLED Signage illuminates spaces that once were hidden away behind the display, completely harmonizing with its surroundings.

Not only that, it can respond according to viewers’ touch, which has great potential for various applications where customer interactions are required.

Featuring self-lighting pixels, the display maintains vivid colors and high contrast ratio even when the display becomes transparent. It brings content to life from wide viewing angles, and the content blends into its surroundings seamlessly and naturally.

By adding P-Cap touch sensor film to the display, the utilization possibilities expand to various industries where customer interaction services are demanding. Users could enjoy its fascinating content using their fingertips with no lag.

LG’s OLED technology makes the Transparent OLED Touch Signage have slimmer structure without backlight unit nor a liquid crystal layer, achieving high transparency of 33% even with P-Cap touch film much higher than conventional LCD transparent displays (10%*). While clearly showing objects behind the screen, it overlays the relevant information right before them.

* Based on LG’s WFB series

Touching a display directly can cause damage or scratches. The tempered front glass protects product from such external impacts and its anti-shatter glass is designed to minimize customers’ injuries.

LG Transparent OLED Touch Signage is designed as a semi-assembled display, meaning you can install it in various ways to fit into existing structures and spaces. With a variety of forms of installation*, it can complement any venue in which it is installed.

MSRP:
Now: $17,400.00
Was:
LG’s OLED technology gives the Transparent OLED Signage a slimmer structure without a backlight unit nor a liquid crystal layer, achieving a high transparency of 38%, much higher than...
Add to Cart