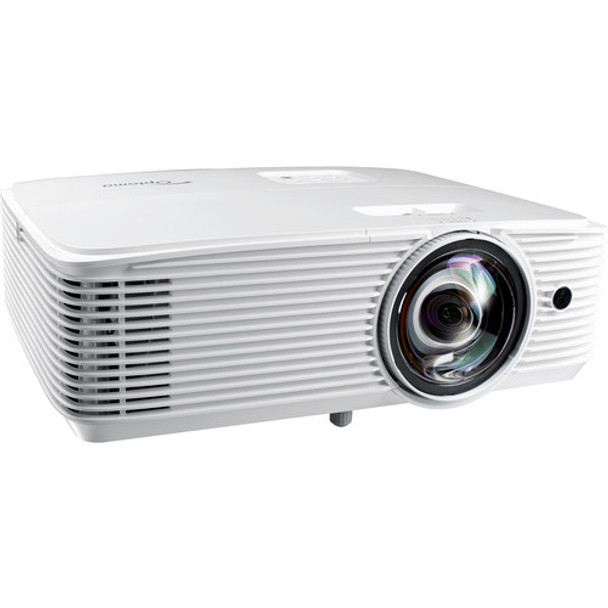 With a latency of less than 14 milliseconds, the 2800 lumen GT1080 Short Throw DLP Gaming Projector from Optoma is optimized for the gaming user who requires as little display lag as possible to make precise moves. It features two HDMI ports, which support HDMI 1.4a - including all mandatory 3D formats - allowing it to be used not only with game consoles, but Blu-ray players, cable boxes, computers, MHL-compatible mobile devices, and more. A single-chip DLP imaging device renders a native resolution of 1920 x 1080p (Full HD), plus the projector can support a range on non-native resolutions from SD (480i) up to WUXGA (1920 x 1200) thanks to internal scaling.

Alongside the two HDMI inputs, there is a 3D sync port that is required when using certain types of RF-based active 3D glasses. In addition, an analog audio output allows stereo audio from the selected input to be passed along to amplified speakers, a receiver, or sound system. There is also a 12VDC trigger output so that the projector can operate another device in a home theater installation, such as a motorized projector screen. A back-lit IR remote is included to control the projector.

Uses a combination of a 0.65" chip covered in millions of micro-mirrors and a color wheel to produce an image. DLP features less spacing between pixels and better contrast than many comparable LCD-based systems, and the design does not require a filter that needs to be replaced.

A single lamp provides 2800 lumens brightness in Normal mode, and is estimated to last 5000 hours (up to 6500 hours if constantly used in the lower brightness Eco Mode). To determine the ideal brightness level for your application, you will need to take into account the screen width, distance from the projector to the screen (throw distance), amount of ambient light near the screen, and the reflectivity (gain) of the screen surface used.

This projector features a 16:9 native aspect ratio, the standard for HDTVs. In addition, the projector can show 4:3 content, either by adding black bars (pillaring), stretching the image to fit, or cropping the image.

Through the HDMI inputs you can connect mobile devices such as tablets and smartphones that have MHL outputs. An MHL to HDMI adapter or cable is required, available separately.

With HDMI 1.4a mandatory 3D compliance, the HD26 can display 3D images from a variety of sources, including many Blu-ray discs and video games. A sync port on the back of the projector allows you to use VESA 3D compatible active 3D glasses. Alternatively, DLP Link glasses, such as the Optoma BG-ZD301 (available separately), can be used. With DLP Link glasses the sync data is sandwiched between video frames thanks to DLP technology's high scan rate negating the need for additional sync hardware connected to the projector.

Note: This will not support all 3D devices. Please ensure your source can supply one of the HDMI 1.4a mandatory formats.

A 12VDC output that can be wired with other equipment in your A/V system, such as a motorized screen, so that when the projector powers on or off the attached equipment responds appropriately - for example, by raising or lowering the screen.

From off to full brightness, the GT1080 features a 25,000:1 contrast ratio. In dynamic mode the projector will adjust lamp output based on the tonal values of a screen to help boost the effective contrast ratio.

MSRP:
Now: $749.99
Was:
About this product Inform and enthral with a Philips Q-Line Professional 4K Ultra HD Display. This reliable solution can be up and running as quickly as you need - with no additional hardware...
Add to Cart
Quick view
Model: V11H852020