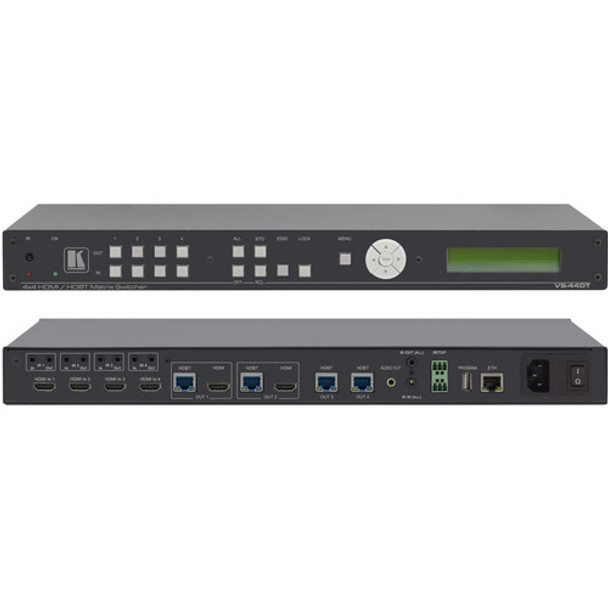 The Kramer VS-44DT 4x4 4K60 4:2:0 HDMI/HDBaseT Extender Matrix Switcher transmits video, audio, Ethernet, RS-232, and IR signals over extended distances. The unit accepts up to four HDMI and four IR inputs as well as Ethernet and RS-232 network and control. The inputs can be routed to any or all of the four HDBaseT outputs—the first two of which also have simultaneous HDMI outputs. VS-44DT connects to compatible HDBaseT receivers, such as TP-780RXR, TP-580RXR and TP-588D. It supports resolutions of up to 4K60 Hz (4:2:0) and WUXGA. The matrix provides PoE (Power over Ethernet) to compatible receivers.

MSRP:
Now: $279.00
Was:
The Atlona AT-UHD-EX-70-KIT is a 4K/UHD HDMI over HDBaseT transmitter/receiver kit for HDMI transmission up to 230 feet (70 meters) over category cable with Power over Ethernet capability...
Add to Cart
Quick view
Model: KD-X222PO

MSRP:
Now: $1,399.00
Was:
Description Listen to music outside with this 4-pack of Sonance Garden Series satellite speakers. The 0.75-inch polyurethane tweeters blanket your yard in high-fidelity audio, while the 3.5-inch...
Add to Cart
Quick view
Model: DSP 2-150

MSRP:
Now: $1,199.00
Was:
Product Description Get rich bass and uniform coverage from your audio system with this Sonance Sonarray subwoofer. The HDPE enclosure resists corrosion, and the canopy design blends in seamlessly...
Add to Cart
Quick view
Model: ST1PLATE2

MSRP:
Now: $149.00
Was:
P40 - Overview Luxul's P40 AC1200 WiFi Bridge + Range Extender offers a simple option for extending the reach of your wireless network. It can be used either as a bridge link for...
Add to Cart