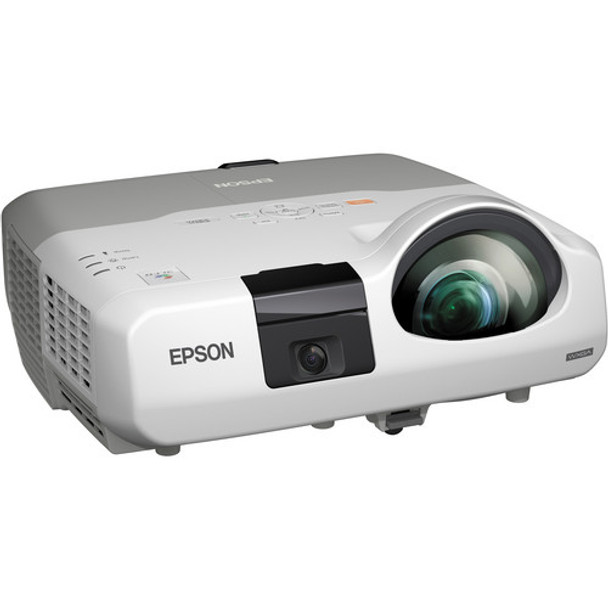 The BrightLink 436Wi Interactive WXGA 3LCD Projector is a high-performance, network-ready, portable short-throw projector from Epson. The key feature is its interactive capability; with the provided special pen, presenters can draw, point, highlight and control directly on the projected image, or on sources such as tablets or phones. In control mode, the pen essentially becomes a mouse, providing full control of webpage navigation or program use. It is optimal for teachers, travelling presenters and trainers. The projector also supports the use of another optional pen, so that two people can write simultaneously on the projection area or on their respective input sources.

Delivering 3,000 lumens brightness, the BrightLink provides high quality images with true-to-life color. This light output enables clear projection even in fully-lit venues, making it optimal for use in situations when darkness would be counterproductive to participation. The auto calibration feature makes set-up quick and easy, with no PC driver required for operation. Once the projector is in place, simply press two buttons on the remote; the projector then puts a calibration image on screen, analyzes and calibrates it, all in about 10 seconds. Being a short-throw projector, the BrightLink 436Wi mounts on the same wall it projects on, preventing interference from the presenter. Likewise, it can be set up for tabletop projection in venues with limited space. Its portability allows for quick set-up and transfer from one location to another. The projector comes with one interactive pen, a remote, rechargeable batteries with charger for the remote, software for the projector as well as the pen, and a power cord.

Almost any smooth, lightly-colored surface becomes an interactive platform with this feature. The projector and pen combination provides a complete interactive solution without the need for expensive electronic whiteboards

Up to 6,000-hour lamp life in eco mode, or 4000 hours in normal mode provide prolonged operation between bulb changes. (Lamp life will vary depending upon mode selected, environmental conditions, and usage. Lamp brightness decreases over time.)

Annotate with built-in, PC-free tools. Write on projected images from your iPad, iPod, Android phone or tablet, document camera, Blu-ray player, or any source that you can connect to the projector; write directly on ordinary whiteboards.

Annotate and interact with projected images using interactive pens (includes one pen; second pen sold separately). Write simultaneously or independently anywhere on the surface on which the image is projected, providing a complete interactive solution without the need for electronic whiteboards

Display content over an IP network from any connected point on the network. RJ-45 LAN (with included software) and RS-232 connectivity; HDMI with HDCP support; USB and VGA ports provide flexibility and modularity to your system. The projector is wireless ready, with a slot for a wireless network adapter (sold separately).

Multiple projectors can be connected to a network, allowing control from a single location. Especially useful in schools or campuses, the feature allows you to shut down all projectors at the end of day to save lamp life and power costs.

Broadcasting announcements or emergency instructions over the network is easy with the BrightLink 436Wi. The feature will override all connected projectors' current function and the announcement will be heard in each location.

Easy to use interactive toolbar for PC and Mac allows two users to interact and save work directly into PowerPoint presentations. Install this toolbar on as many computers as you need, with no license restrictions.

MSRP:
Now: $88.19
Was:
PRODUCT HIGHLIGHTS In life and in business, things don't always go as planned. With Samsung Protection Plus, you'll be ready. We offer a highly flexible suite of extended service options that go...
Quick view
Model: HG65NJ678UFXZA

MSRP:
Now: $2,199.00
Was:
Product Description Drive exquisitely detailed home cinema with this powerful SR6015 AV amplifier. Delight in the most musical sound for any source - from movies to vinyl to digital streaming. Its...
Add to Cart
Quick view
Model: MN-10

MSRP:
Now: $99.00
Was:
Product Description This item can be configured as a router or wireless node. Each node in the network is able to communicate with other nodes, forming a point-to-point mesh via a separate third 5...
Add to Cart
Quick view
Model: RX-V4A