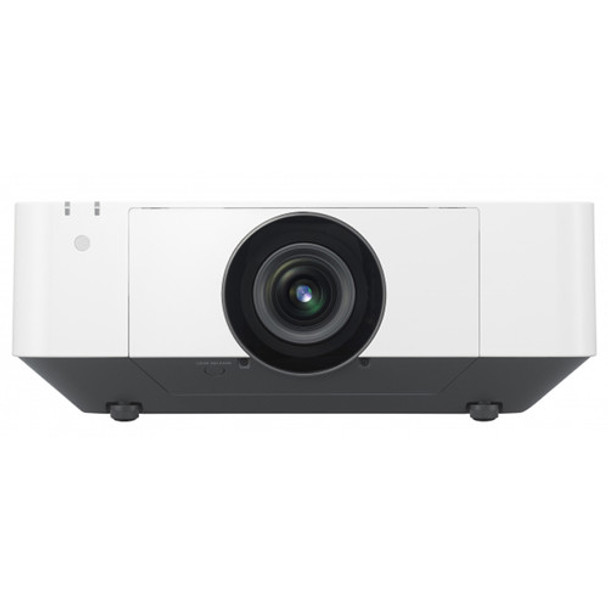 Enjoy bright images in most installations with the white Sony VPL-FHZ60 5000-Lumen WUXGA 3LCD Laser Projector. Its 5000 lumens of brightness and 10,000:1 dynamic contrast ratio work together to overcome light in relatively bright rooms and provide detail in dark areas of the image. It sports a 3LCD display system with a 1920 x 1200 WUXGA native resolution for viewing HD video and detailed pictures or data. The projector's 1.39 to 2.23:1 throw ratio and 1.6x powered zoom provide a range of throw distances for focused images.

The VPL-FHZ60 features HDBaseT, HDMI, DVI-D, BNC, and VGA inputs for connecting to nearly any source, as well as analog audio input and output ports for passing sound through the projector to your sound system of choice. The projector is controllable via HDBaseT, RS-232, or the included remote control.

5000 Lumens of White and Color Brightness

Reduce running costs even further with onboard energy-saving features like Picture Mute and Auto Dimming.

The quick power on/off feature cuts warm-up time after turning the projector on so you can start presenting at full brightness.

Position the projector at nearly any angle, including on its side or upside down.

The included lens can be swapped out for an optional lens to suit virtually any size of room and throw requirements, and the bayonet mount design helps simplify lens replacement.

Simplify your installation with digital transmission of HD video, audio, networking, and control over a single Ethernet cable.

Install multiple projectors together and use the Edge Blending feature to join color-matched images together for oversized displays in corporate and education environments.

Correct image geometry to project natural-looking images on convex or concave surfaces with Image Warping. Corner and edge correction cal be adjusted with the remote and on-screen menu.

The case features a flat top surface designed to discreetly blend in when it's mounted on your ceiling. The terminal cover also helps reduce cable clutter.

Project images from two inputs at the same time. This is convenient for use in video conferencing, medical training, and other situations where two images need to be seen simultaneously.

MSRP:
Now: $9,000.00
Was:
The VPL-FHZ60 laser projector is ideal for a wide range of business, education, and entertainment applications. The powerful Z-Phosphor laser light source is teamed with Sony's advanced BrightEra...
Add to Cart

MSRP:
Now: $97.99
Was:
Samsung VG-SCFT32 Overview Customize the look of your Samsung 2020 32" The Frame TV with this vivid lemon Samsung Customizable Frame. It snaps onto your TV for a quick and simple installation...
Add to Cart
Quick view
Model: QN75Q90TAFXZA