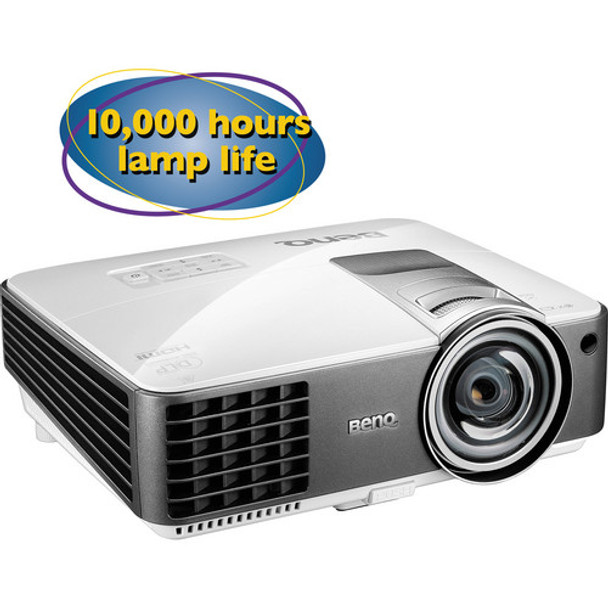 Bring your classroom presentations to life with the BenQ MX819ST 3000-Lumen XGA Short Throw Projector. It supports the BenQ PointWrite system for full interactivity. Its 3000 lumens of brightness will effectively combat most ambient light, and its 13,000:1 contrast ratio combined with its 1024 x 768 native resolution will deliver clear images at most seating distances. Plus its short 0.61:1 throw ratio will enable you to place the projector near the screen, allowing passers-by to easily avoid casting shadows on the image.

The MX819ST can connect to most sources with its HDMI, S-video, RCA, and two VGA inputs, and you can also daisy chain it to other projectors to show the same image with its VGA output. An analog audio input and built-in 10W speaker will bring sound to your presentations, and if you need more power, the projector also has an analog audio output. It is controllable via Ethernet, RS-232, or the included IR remote. Also included is a VGA cable for instant connectivity.

The Eco Blank mode allows teachers to blank the projection screen whenever they need to direct their students' focus back on them, or simply when the projector is not in use. When activated, this feature dims the lamp power automatically, lowering the total power consumption by 70%.

The projector automatically switches to Eco Blank Mode after the projector is turned on for over 3 minutes without a display source. This eliminates unnecessary energy waste and prolongs the life of the projector lamp.

The projector offers better contrast and blacker blacks with a 13,000:1 contrast ratio.

When inactive, the projector keeps power consumption to a minimum, using less than 0.5W on standby mode. This extends lamp life and reduces energy costs.

The projector features DLP technology to support 3D functionality, allowing schools to bring an immersive learning experience to their students. All you need are 3D glasses and 3D content from your Blu-ray player.

The short-throw projection distance keeps the projector light from shining directly into your eyes, allowing you to keep your focus on your audience.

Shadows often interrupt your presentation. With a close projection distance, you and your audience can move freely without worrying about obstructions between the projector and the screen.

LAN Control with Crestron and PJ-Link

The projector features LAN Control that is designed to help IT managers perform day-to-day projector maintenance and repair tasks efficiently and effectively. It offers them full access and control over the projector directly from their workstations. It also offers seamless support for the Crestron and PJ-Link LAN Control system.